Celebrating over 30 years of developing after school chess programs in the greater NY area.

CITY Program: Chess in the Yeshivot

The pilot program started at the Yeshiva Ramaz Lower School in New York City. National Master Mark Kurtzman began teaching classes and organizing the program in January 1991. After 4 years, he took his players to compete at the Greater NY Championship. Trophies went to the top 6 teams and Ramaz squeezed its way into the 6th place spot! Two years later, the team tied for top honors placing ahead of such schools as Hunter and Dalton!

The Ramaz players went on to achieve great success in scholastic chess, winning the 5th Grade National Title at the Grade School Nationals in 2008 and placing 2nd at Grades Nationals in 2010, behind the famed IS 318 Team who starred in a feature length film in 2012. The 2003 Kindergarten National Champion was also a product of the CITY program. Ramaz currently has a curricular and after school chess program.

Since then, Tri-State Chess has developed a number of chess programs in Yeshiva Schools all over the Greater NY area. Our program at SAR Academy (Riverdale, NY) has been running for almost 20 years and we have had an annual Chess Championship tournament there for the last 12. SAR currently has a curricular K and after school chess program as well as a curricular enrichment program for the 5th and 6th grade.

Because many of our players are Sabbath observers, it has always been difficult to be fully represented at Nationals, where it is required to play one round on Friday night and 3 rounds on Saturday. Instead, we have created our own community of chess players and tournaments.

Other programs have been developed over the years, and all of them have produced an abundance of chess players as well as tournament players who look forward to competing monthly at our local chess championship tournaments, held only on Sundays.

While all of our programs are not Yeshiva Schools, we are constantly trying to add to our Yeshiva community and increase the Yeshiva presence at our monthly championship tournaments.

Call Us To Learn More

Register Online and your entry will appear automatically on our Advanced entries page! Players will see in advance which players are competing in a specific tournament & the schools they are from. 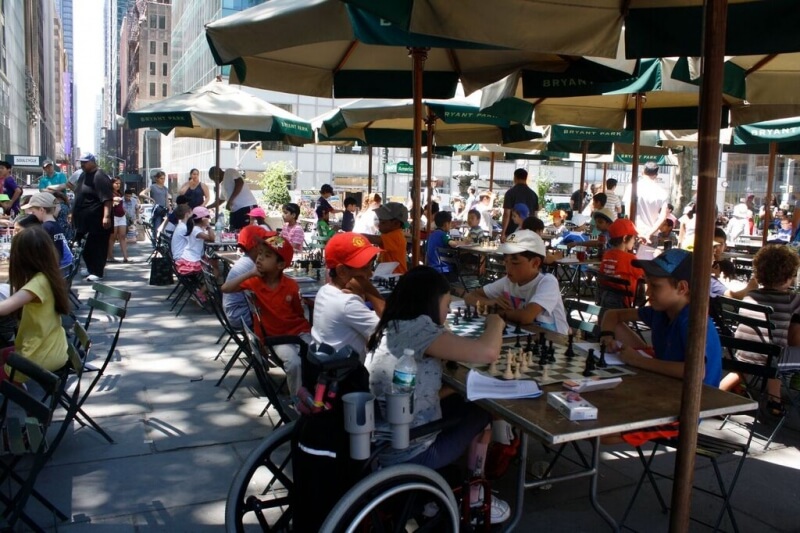 Tournaments at Bryant Park are divided into 7 sections based upon age and strength.  Players can play "up" into any section.  The top section includes Adults and offers Cash prizes.  Trophies, plaques and medals to all others.

Providing students chess activities throughout the summer months in the NY area. Contact Us for more details and schedule for next Summer.

One of the best ways to improve your game is to bring the score of your tournament games to your chess coach & have them analyze the game with you.